Many policymakers have suggested that year-round financial aid can help students complete college faster by increasing course enrollment and credit accumulation outside of the fall and spring. MDRC has found evidence to support both halves of that argument: that year-round financial aid can increase enrollment during the summer and winter, and that summer and winter enrollment can help students earn more credits.

From 2008 to 2011, Congress made Pell Grants available to students year-round. That policy was discontinued because of fears that the costs outweighed the benefits, but there was little firm evidence available for policymakers to draw on (although one study did describe which demographic categories of students were likely to be most affected by its removal).[1] As policymakers consider reinstating year-round Pell, results from three MDRC studies can inform their decision. All three assigned students at random to a program group or a control group, which means the differences discussed here are reliable estimates of the tested programs’ effects.

One of these studies — the Performance-Based Scholarship Demonstration evaluation at two community colleges in New York City — evaluated the effect of adding a summer scholarship offer to scholarships otherwise offered only during the fall and spring. Students in the program group could receive up to $1,300 per semester if they enrolled for a certain number of credits and kept their grades above a “C.” Half of the program group could receive the scholarship for two semesters, the other half for two semesters plus a summer term. The summer-scholarship group was 6.8 percentage points more likely to enroll in summer than the group who received scholarships only in the fall and spring, an increase of about 35 percent over the fall-and-spring group’s summer enrollment rate of 19.4 percent.

Recent research suggests that undergraduates who attend summer school have better retention rates thereafter and are significantly more likely to complete a degree.[2] Two MDRC studies encouraged students to enroll in summer and winter and included financial support for them to do so. Those two studies also suggest that increased enrollment during intersessions may be linked to greater credit accumulation over time. Students in both studies could use financial aid during the summer and winter, meaning that the usual financial barriers to year-round enrollment were largely absent.

MDRC evaluated the City University of New York’s (CUNY’s) Accelerated Study in Associate Programs (ASAP) in three of the CUNY system’s community colleges. ASAP, a comprehensive program for low-income students with remedial needs, was found to nearly double graduation rates after three years, the largest impact MDRC has found in more than a decade of research in higher education. Much of the impact could be traced to ASAP’s outsized effect on students’ performance during summer and winter intersessions — where ASAP pushed hard for students to enroll. 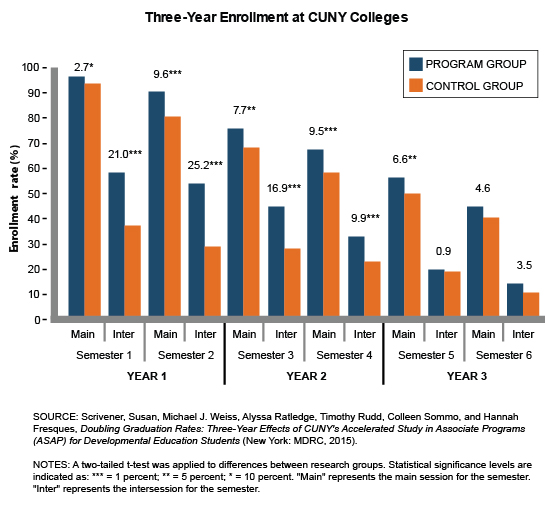 During the main sessions of the second through sixth semesters after students joined the study, ASAP boosted enrollment by between 4.6 percentage points and 9.6 percentage points. Yet ASAP’s effects on intersession enrollment were far more dramatic, peaking at 25.2 percentage points during the second semester. That rise in intersession enrollment is responsible for the program group earning on average 2.4 more cumulative total credits over six semesters (the equivalent of taking nearly an additional extra course), about a quarter of the program’s total impact on credits earned.

MDRC’s evaluation of the Opening Doors Learning Communities demonstration at Kingsborough Community College also found that on average, program group students enrolled in more intersessions than control group students and earned more credits on average during intersessions: 0.5 credits more in the first year (than the 3.7 credits earned in the control group) and 1.0 credits more after six years (than the 9.2 credits earned in the control group). This gain accounted for about a quarter of the program’s total impact on credits earned. The demonstration put freshmen into groups of up to 25 who took three classes together their first semester, and provided enhanced counseling and tutoring as well as textbook vouchers. Students were encouraged to enroll in the intersession following the program session, and received an additional textbook voucher of $75 if they did.

Taken together, these three studies suggest that year-round Pell may be beneficial. If it is reintroduced, however, it should be with a plan for rigorous evaluation to inform the policy moving forward and avoid the uncertainty associated with its first iteration.